A downloadable tool for Windows

Autotile packing tools is a set of tools for working with autotile-based image formats on Windows.  They can be used by drag-and-drop of source file(s) onto the corresponding tool, or by using a shell (such as cmd.exe or powershell on Windows).

unpack-minitile-a2.cmd- takes an RPGMaker-style autotile image (e.g., "A2" format) with 8px minitiles, and "unpacks" them to 16px tiles, for use in alternative tilemap editing software (such as  tiled).

scale2x.cmd, scale3x.cmd - increases the size of the input image by 2x or 3x for use in rpgmaker VX and MV respectively.

scale0.5x.cmd - shrinks the dimensions of the input image, by 50%.  Useful if you only have upscaled VX tiles and need to shrink it prior to unpacking

unpack-minitile-a2-gms16.cmd - takes an RPGMaker-style autotile image (e.g., "A2" format) with 8px minitiles, unpacking them into 16px tiles layout that is easier to import into GameMaker Studio 2 - each autotile cell is unpacked into a row of 16 tiles.  An additional blank row is inserted at the beginning, as GM does not allow you to use the first cell of the tilesheet, and the last column is left blank as RPG Maker's "autotile" cell does not include enough metadata to construct a "filled outer tile".

unpack-minitile-a3.cmd, unpack-minitile-a3-gms16.cmd - Similar to the "A2" versions, but can unpack "A3" autotile layouts.   The -gms16 version exports to a layout that's easier for gamemaker to import.

unpack-minitile-a4.cmd, unpack-minitile-a4-gms16.cmd - Similar to the "A2" versions, but can unpack "A4" autotile layouts.   The -gms16 version exports to a layout that's easier for gamemaker to import.

minitile.exe - the compiled "command line" program that does all the work.   This file must be next to the .cmd files in order to work.

Input files are left untouched, and the tool outputs files with a suffix, for example, _packed.png, _expanded.png, or _2x.png, etc

If you have any requests (e.g., processing you do manually, other autotile formats, etc), comment here, DM me on Twitter or Discord (fmoo#8677),  and share a screencast.

If these tools have been useful for you, please consider donating.

All source code is available on github if you'd like to contribute.

Hey fmoo! I'm having some trouble with these utilities, hoping you can help! Scale 2x and 3x are working fine, but "unpack minitile" does nothing for me. When I drag-and-drop the png, nothing happens. When I try using it from the command line, I get an error: "TypeError: unpack_subimage() missing 1 required positional argument: 'MTS'"

Not sure what I'm doing wrong here, but if you can point me in the right direction I'd appreciate it! Thanks!

Thanks for reaching out!   Looks like I pushed a bad build.   I know I sent you the fixed build over discord, but I'll be pushing an updated build here in on itch in a little bit.

Awesome man, thanks for the update! It's working perfectly. 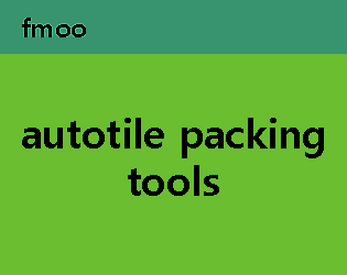